Today I’ll show you how to build a rock-solid home/office NAS server using a Mini-ITX motherboard, a dedicated hardware RAID card, and enterprise class SAS hard drives, all in a Mini-ITX NAS case with an 8 drive hot-swap bay. Total budget is between USD$850 to USD$2,000 depending on the hardware you choose (I’ll give links to all the gear you’ll need).

Having your own home or office NAS server is a great way to back up files, stream movies/audio, and share files on your local network. You can buy expensive off the shelf systems with or without included hard drives, but they’re not a patch on the system I will show you today plus, it’s way more fun building your own NAS server!

Advisory: This is an intermediate level tutorial. You will need at least some experience building PCs and understand technical terms to complete this guide. That being said, I am always here to help and if you have any questions about the gear I link to, please email or comment before purchasing.

I’m using a dedicated hardware RAID card in this tutorial rather than the motherboard BIOS to configure software RAID. For a home/office server, hardware RAID is so far ahead of software RAID it’s almost incomparable. Add to that a nice big cache and battery backup, and it’s a no-brainer. In my early days, I used software/BIOS RAID for my workstation and had endless troubles with disks falling off the array with disastrous results, so I don’t recommend software RAID. See this comparison of Hardware vs Software RAID.

I will be using enterprise-class SAS hard drives rather than desktop-class SATA drives because SAS (Serial Attached SCSI) is faster, more reliable, and built for RAID arrays (see HP’s take on SAS vs SATA). Don’t worry about costs either. I’ll show you how to get brand-new SAS drives on the cheap.

You need to decide if you’re using SAS-6G (6Gb/s transfer speed) or SAS-12G (12Gb/s transfer speed) as they vary considerably in price. It will also influence what RAID card and case you choose later in this guide. I use 6G SAS, and it never gets close to stressing the server no matter what I throw at it, so unless you have a busy home/office, stick with 6Gb/s SAS gear throughout this guide and save some $$ ;)

Choosing the right RAID level will also determine how many hard drives you need to purchase, so it’s best to choose your RAID level well before buying any hardware. I will give you a quick overview of some standard RAID levels and their pros and cons.

I recommend RAID-5 or RAID-6 because they provide the best redundancy and speed (I use RAID-5 as you still retain 66% disk space compared to 50% for RAID-6). See Wikipedia RAID Levels for a good overview and technical data, and this RAID calculator will help you see how much disk space is available for each RAID level.

Now let’s start with the hardware and keep in mind, it’s very flexible. You don’t even have to use a Mini-ITX motherboard if you don’t want to (although you’d need to choose a larger case). You don’t need to buy everything new (some RAID cards I recommend are used). Used server hardware is fine except for hard drives (more on that later).

The most important feature when choosing a motherboard is that it must have a PCIe slot that runs at a minimum x8 electrical, and either x8 or x16 physical, to accommodate the RAID card.

If you’re choosing your own motherboard, some additional features to look for would be:

The PRIME H610I-PLUS D4-CSM motherboard is perfect for a home NAS server. It accepts Intel 12th Generation Core i7, i5, i3, Pentium and Celeron CPUs in a 10nm process so plenty of choices. It has a PCIe x16 slot for the RAID card, supports up to 64GB DDR4 Non-ECC RAM running at 3200Mhz, an M.2 PCIe x4, Gigabit LAN, and 4x SATA-III 6Gbp/s ports along with other standard ports. For the ASUS PRIME H610I-PLUS D4-CSM I recommend any of the following CPUs, but specifically the Core i3 (those designated with a trailing “T” indicate low wattage and high power efficiency) ETA: Due to the world-wide chip shortage, Intel “T” series CPUs are very hard to get, so until the shortage is eased I have linked to the standard CPU version below:

By enabling C-States in the motherboard BIOS you can configure Intel “T” class CPUs to run at 25 watts when idle. Here is a full list of compatible processors.

Some guidelines for choosing RAM:

For the ASUS PRIME H610I-PLUS D4-CSM motherboard I recommend the following RAM modules: The Silverstone DS380 case is a little beauty with an 8-bay 3.5”/2.5” hot-swap cage that’s also lockable, a 12G/6G SAS/SATA backplane, four fixed 2.5” drive slots, all in a sleek, brushed aluminum case. You’ll need one or two Silverstone CPS05 SFF-8643 to SATA + Sideband cables to hook up your 12G SAS RAID card to the backplane, with each cable supporting up to 4 drives. 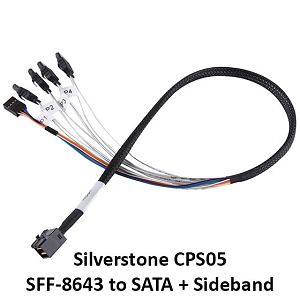 We don’t need too much power for our NAS server, 300 watts is fine and remember that ATX power supplies are switch-mode, meaning they don’t run at 300 watts all the time. Instead, they regulate the wattage according to load, so you’ll find it will be pulling more like 70 watts during normal operation. I will give you several choices for RAID cards both 6G and 12G including new and used. As I said previously, unless you’re expecting a large amount of traffic to your NAS server, stick with 6G as its significantly cheaper overall. Some notes on choosing your own 12Gb/s RAID card instead of the cards I link to below: SAS (Serial Attached SCSI) hard drives are an enterprise-class product made for RAID arrays with advanced features to maintain data integrity. They are built to last much longer than desktop class SATA drives, but cost is the drawback for home/office users, at least for the latest capacity SAS drives.

So how do we get SAS drives on the cheap? Let me explain: When a big company asks their IT department to set up a large storage array of say 1,000 SAS drives, their IT department will start to crunch the numbers. For example: In 2015, a $600 Seagate Constellation 6Gb/s SAS drive of 4TB capacity might have a lifecycle/warranty period of 5 years, and a failure rate of 2%. The IT team would then double the failure rate to 4% and order 1,000 + 40 = 1040 SAS drives because they expect roughly 4% to fail.

At the end of that 5-year life cycle, there are often spare drives that were never used and still in original packaging, but are essentially useless to the company as they’re now upgrading to HGST 12Gb/s 10TB SAS drives. So, the I.T department sells those drives dirt cheap to computer parts shops, who then sell them cheaply via Amazon or eBay. There isn’t much demand for these drives because home users don’t have a clue what a SAS drive is, or if it will fit into their PC (which it won’t).

Now I realize they’re not huge capacities, but even four 4TB SAS drives in a RAID-5 array will give you 12TB of useable storage. If you need more, double that and you get 24TB of storage, your still way ahead of others buying SATA drives.

Some tips for choosing a good set of SAS hard drives:

You have two choices for the operating system hard drive: either a SATA SSD connected to a normal SATA port, or an M.2 SATA/PCIe drive in the motherboard M.2 socket which runs much faster. NAS operating systems don’t take too much space either, so a 250GB drive is fine.

For the PRIME H610I-PLUS D4-CSM motherboard I recommend the following OS hard drives: You can create your RAID array before or after you install the operating system, but I recommend before. You’ll need to enter the RAID BIOS during boot-up and create the array. During boot-up your RAID card will show the key combination to enter the BIOS (usually Ctrl + R, Ctrl + H etc).

Because each RAID card is different in the way it creates arrays, I can’t show you how to do that here. Instead, you’ll need to search Google for the RAID card brand and model to find the manual, then follow the instructions in it. Download manuals from LSI/Broadcom, Highpoint RocketRAID, Intel.

There are a number of good choices for a NAS operating system, some offer paid support, paid add-ons, and community support. I’m a big fan of OpenMediaVault as it’s based on Debian and is rock solid, but that’s just a personal preference. I will give you some info on each below, but please visit their respective websites to see for yourself. Once you’ve chosen a NAS operating system, follow the instructions to install it using a USB drive as you don’t want to muck around with CD/DVDs etc. Burn the ISO or IMG file using Rufus or Universal USB Installer. Also make sure you install onto the correct hard drive because your RAID array will show up as an installation location option.

After installation, login to the web admin of your NAS server and start configuring your system (you may need to log in to your router to find the NAS IP address). One thing to remember, do not use the NAS system to create any RAID arrays, that option is for software raid only, you already have a hardware-based RAID array and it’s completely managed by the RAID card BIOS. All you need to do is create a file system on the array/volume, create a shared folder, and then configure services and users to access that share (Samba, CIFS, FTP etc).

Hopefully your NAS server build has gone without too many hitches and you’re enjoying the awesomeness of NAS on your network. Remember to email me or comment below if you need any help with the build, or want me to check a certain product for compatibility etc. If you need help configuring your NAS operating system, visit the respective community help forum or official documentation (YouTube has help guides too). Also check out my guide on building a Raspberry Pi NAS server for a bit of fun.